Hotels in the centre of Maspalomas

This bungalow complex is situated on the outskirts of Campo International, just 2.5 km from the dune beach of Maspalomas... 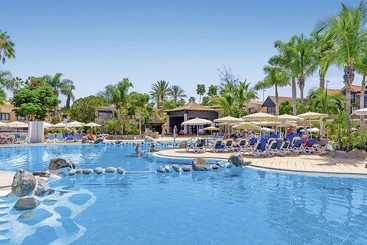 Beautiful tourist complex of Canarian style, formed by bungalows of a plant, surrounded by an extensive subtropical garden...

FBC Fortuny Resort - Adults Only is set in Maspalomas, 800 metres from Maspalomas Golf Course. Free WiFi is provided throughout...

The apartment complex is approximately 800 m from the sand dune beach of Maspalomas. Links to the public transport network... 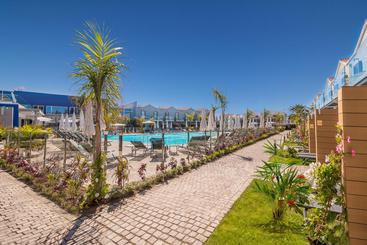 Los Calderones THe Senses Collection - Adults Only is a hotel for only adults, and is situated in Maspalomas, more exactly... 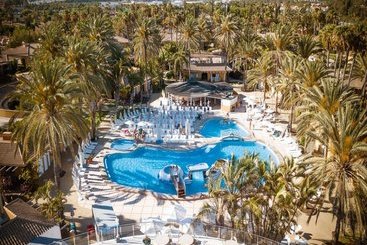 Located 600 mts away from the commercial centre Oasis Meloneras and the Masapalomas beach. Dunas Suite is perfect for families... 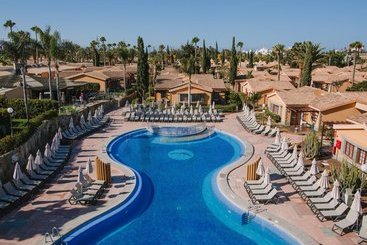 This bungalow complex lies approximately 1.4 km from Maspalomas beach and there is a hotel bus service 3 times a day. Faro...

On the Gran Canaria island you will find one of the most famous beaches of the island, the Maspalomas beach, it is one of the most well-known beaches in San Bartolomé de Tirajana which has 29 beaches and bays, and Maspalomas is one of their most visited paradises.
Maspalomas has the blue flag of the EEC, it is a beach of fine sand surrounded by dunes of the same quality, it is well-known as a beach for everyone and is divided into three parts, the first part is specially for families, the second one belongs to the naturists and the third one is the gay area.
The beach is very busy and has all kinds of services, shops and restaurants to enjoy without leaving the beach, you also can practice any type of sport there.
Nearby there are several parks like the Aquasur park, the Aboriginal world, the Holaday World, the Palmitos Park or the Soiux City, an area dedicated to have fun.
For visiting the town of San Bartolomé de Tirajana we have a lot of routes and places to go, from national parks and rural areas, archaeological sites or the viewpoint of Arteara, and the architectural heritage of the city also deserves to be specially mentioned for the extensive which is... the Lighthouse of Maspalomas one of the places we should not miss.
At sunset, the beach becomes the meeting place for people who like to enjoy the nightclubs, pubs and bars which are surrounding the beach and often are extending the hours of closure after 6 am... the activity is especially focused around the shopping centers where it is impossible to get bored, it has lots of live performances and music festivals.
Most people begin their walk at the Old Heineken Bar, it is a good place to chill out and have a quiet chat, other bars and options are the Cuasquias, El Coto and La Romería where you can enjoy drinks from all over the world.
See more See less

It depends on the category of the hotel. If you want to stay at a 4-star hotel in Maspalomas, the average price per night is €51, while you will pay an average of €41 for a 3-star hotel, and in a more luxurious 5-star hotel, you"ll pay around €79.

You can make reservations at Seaside Grand Hotel Residencia, Salobre Hotel Resort & Serenity and Seaside Hotel Palm Beach if you"re looking for a hotel with valet service for your visit to Maspalomas.

If you're bringing a vehicle, we recommend that you book a hotel with parking in Maspalomas, like Hotel Siesta Suites, Seaside Grand Hotel Residencia or Bungalows Villas Blancas - Gay Men Only.

If you need a hotel with disabled access in Maspalomas, we recommend Seaside Grand Hotel Residencia, Palm Oasis Maspalomas and Faro, a Lopesan Collection Hotel.

If you want an adult-only hotel in Maspalomas, some of the best options for adults only are Hotel Club Maspalomas Suites & Spa, La Mirage Swingers Complex - Adults Only and Bungalows Villas Blancas - Gay Men Only.

According to our clients, if you´re travelling with children, the best hotels in Maspalomas are Bungalows Villas Blancas - Gay Men Only, Seaside Grand Hotel Residencia and Hotel Siesta Suites.

If you want to save time, the hotels in Maspalomas with express check-in and check-out are Apartamentos El Capricho, Apartamentos Club Vista Serena and Campo Golf.

Some of the options for hotels with non-smoking rooms in Maspalomas are Hotel Siesta Suites, Seaside Grand Hotel Residencia and Bungalows Villas Blancas - Gay Men Only.